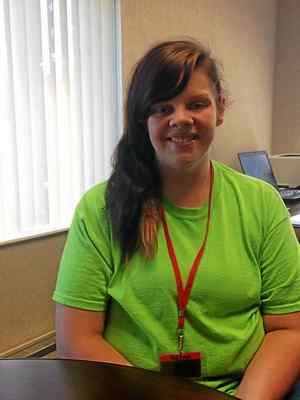 Keri Fackler, a resident of the new NorthEast Ohio Community Alternative Program in Painesville Township, recently speaks about how far she has come in her treatment for heroin and meth addiction. She credits NEOCAP with giving her a second chance at life. (Tracey Read-The News-Herald)
By Tracey Read, The News-Herald
Posted: 08/27/16, 7:37 PM EDT | Updated: 1 week, 3 days ago

Keri Fackler considers it a blessing in disguise that she got arrested for burglary.

The 27-year-old Ravenna resident was in an abusive relationship with a man who forced her to commit petty crimes with him to get money.

“I was a drug user with that — meth and heroin,” she said. “My boyfriend would make me do things. On that day, I rode with him to the scrap yard (while he stole scrap). I was a mess. I haven’t had my kids in two years. They were in foster care, and now my (estranged) husband has them. The judge said I was either going to die from an overdose, or my ex-boyfriend was going to kill me.”

Fackler’s charge was amended to receiving stolen property, a fifth-degree felony, and will be off her record six months after she graduates from the program Sept. 7 as long as she stays out of trouble.

Fackler is serving out the remainder of her time at the new NEOCAP facility that opened June 20 in Painesville Township at 2025 Blase-Nemeth Road. She has been assigned to kitchen duty — one of the prime job assignments at NEOCAP.

“I’ve learned quite a bit being here,” Fackler said during a recent visit to the facility, which houses offenders who are sentenced in Lake, Ashtabula, Portage, Geauga and Trumbull counties. “I changed my mind set. My family sees a difference in me. I used to lie and manipulate to get my way. I’m doing domestic violence programs here to learn how to stay away from (my ex). I also want to go to college and work with young kids.”

Lori Carson, director of NEOCAP’s female facility, said Fackler is learning all the skills she needs to be successful on the outside.

NEOCAP is a four- to six-month program. The new location houses about 60 women and is almost at full capacity. There is a waiting list in all five counties.

“It’s a structured program,” said Carson. “They focus on the issues that got them here. We use an incentivized behavior-management system. Our residents wear their own clothing. We try to treat our residents with respect. They will then treat us with respect. We try to give them the best environment that is like living on the outside — without living on the outside. Ten percent are not successful inside the program. They must then go back to jail in their home county, and the judges could put them in prison. A lot of our residents are mothers who want to get their children back.”

Each resident is assigned a case manager, and is placed in treatment groups based on their needs. The groups meet at least once a week. Throughout their stay, each woman works on a success plan for themselves that they can refer to after their release.

“They must work on treatment-related materials from 9 to 5,” Carson said. “Leisure time is after dinner. They can play card games, board games, watch TV on specific stations or exercise outside.”

The residents do their own laundry. Normandy Catering in Wickliffe delivers hot lunches and dinners and a cold breakfast each day, but residents are in charge of serving the meals and cleaning up.

Lake County Commissioner Judy Moran is widely credited with bringing NEOCAP to the area. The 15,000-square-foot facility is located at the site of the former Lake County Minimum Security Facility, which essentially remained vacant since it was closed in 2009 due to Sheriff’s Office budget cuts.

“I started thinking about it seven years ago while I was (Mentor Municipal Court) Judge (John) Trebet’s Mental Health Court liaison,” said Moran. “At the time I was working there, they were trying to turn it into the Utilities office or something like that. I talked with Judge Trebets, and he thought it would be perfect for NEOCAP. It was a pristine facility.”

While Lake County maintains the grounds, NEOCAP assumes complete operating and financial responsibility for the facility. The Ohio Department of Rehabilitation and Corrections is the primary funder for NEOCAP.

It states in the $3 million grant that the building can only be used for a correctional purpose.

In April, the county commissioners approved a five-year lease agreement with NEOCAP with an option for five more years.

So far, 20 jobs per shift have been created through NEOCAP, said Moran.

“The project is a great collaboration between my fellow commissioners, Lake County judges, the Corrections Board, the Sheriff’s Office, Adult Probation, NEOCAP and the Ohio Department of Rehabilitation and Corrections,” Moran added. “It crossed all political party lines.”

Roughly 25 percent of the local NEOCAP residents are from Lake County, which allows residents’ loved ones easier access for visitation than the Warren location — the only previous option.

New Hope
Lake County Sheriff Dan Dunlap said the female population at the county jail increased from an average of nine a day in 1990 to 58 by 2010 — in part due to the national heroin epidemic.

“Bringing NEOCAP to Lake County will give us the ability to treat Lake County female inmates closer to home, and allow their families to participate in their recovery program,” Dunlap said. “It will also reduce waiting time to get into treatment and address the backlog of female offenders in the Lake County Jail.”

NEOCAP residents deserve something to live for and hope for, Moran said.

“They’ve committed a small crime. Nobody should have that held against them forever,” said the commissioner.

Lake County Common Pleas Judge Vincent A. Culotta said the ideal NEOCAP candidate is someone with prior attempts at treatment who sincerely wants to get better.

“There’s more to it than just drug counseling,” Culotta said. “It’s everyday life skills — how to look for a job, how to be successful. They have to be serious about getting help. They can’t just look at it as an alternative to prison. You have to put in the necessary work. It’s a long commitment.”

Fackler, who misses her 8-year-old son and 3-year-old daughter, said she’s serious about getting better.

She plans to live with her grandmother after her release and use her newfound skills to help her stay away from bad people, places and things.

“I get a new chance at life,” Fackler said.